Apple  Inc. is one of the biggest companies globally, which produces hardware and software products, like the well-known iMac, iPod, iPad, and iPhone. All we know also, who was behind this master-of piece, its famous founder, Steve Jobs, when in April 1976 had launched the first Apple personal computer. The same strategy and logic were continued after Job’s death, in 2011, when Tim Cook took the CEO leadership and achieved a tremendous number of 3 times the market capitalization within 4 consecutive years, between 2018 and 2022. Now the company is estimated near the $3 trillion and is traded on Nasdaq, but also has the first place in the benchmark, S&P 500.

Examining the monthly trading chart (log scale), we shall recognize that the pattern is an impulse, making the I Cycle wave a leading diagonal. After that, the stock has completed its II, III, and IV Cycle waves, and till now, it has constructed the 2 out of the 5 Primary degree waves, ((1)) and ((2)). We are in the middle of finishing the next ((3)) Primary, which was subdivided into the (1) – (3) Intermediate waves.

Thus, to complete the whole wave, it remains the corrective (4) and the upside (5) Intermediate waves of the ((3)) Primary wave. Then, it will follow the rest of ((4)) and ((5)) Primary waves, as shown on the chart, to close the V Cycle wave.

Just to remind you that, here we have the case of 1-2, 1-2 extension of the ((3)), so the stock is in the third of the third way pattern, which is considered the strongest wave of all, in sharpness and length. If we compare from the monthly trading chart the ((1)) and the unfinished ((3)) Primary waves, maybe this 3 Minor of the (3) Intermediate wave, hasn’t ended yet. However, to not go up infinitely, we keep our basic scenario to the correction mood.

On the daily trading chart (log scale), we see better the break of the uptrend structure, since the stock made lower highs and lower lows. Thus, we are within a decline and we already count a 3-wave sequence down, but from the Fibonacci retracement tool, Apple hasn’t approached the 23,6% level being at $111,41.

So, logically the drop is continued. What do we mean by that? Since the pattern has constructed a 3-wave count, the only option that we have is the double three combinations, as a W – X – Y Minor degree waves. The W has ended at $132,61, and it’s time for a bear market rally for the X Minor, which has found resistance at the end of the ((a)) Minute of the W Minor wave, at $150.

Hence, let’s wait until we can count a right 3-sub-wave mode of any corrective shape for X Minor, almost at the previously mentioned levels, and then we will be sure to enter a downside trade for the completion of the Y Minor of the (4) Intermediate wave. 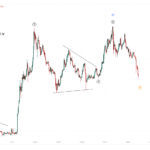 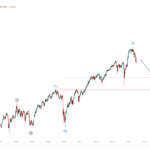