Corn, especially in British English and in the cognate form in all other Germanic languages, refers to the principal cereal crop of any given region. In 2020, total world production was 1.16 billion tons, and the United States alone, was the most widely grown grain crop, with 361 million metric tons, touching the first place with second the China reaching the 260 million metric tons, which are the 31% and 22,4% of the total production respectively.

The so important commodity is traded now at $772 its high value was at $843,6 in August 2012, its all-time low according to our data source was at $112,4 in September 1971, and in April 2022 almost approached the highest level of 2012 at $824,1, due to the reason of the unfinished invasion of Russia in Ukraine. Ukraine produces 30 million metric tons and Russia almost 14 million metric tons, but the Ukrainian quantities cannot be exported at all.

The monthly trading chart (log scale) is showing the fluctuations that had taken place between the 1970 and 2007 period. After the ‘’Lehman Brothers’’ crisis, Corn climbed to a new high through the unlabeled (V) Super Cycle of the III Grand Super Cycle wave, as an ending contracting diagonal.

Since 2012, corn is trying to form a sideways corrective pattern for its ((IV)) Grand Super Cycle wave, having completed till now the (a) Super Cycle wave as a 3-wave sequence of an a-b-c Cycle degree waves zig-zag. Thereinafter of the Pandemic crisis in 2020, corn rose sharply again with a 3-wave mode, constructing the (b) Super Cycle wave. In our mind, since the end of (b) didn’t exceed the highs of 2012, the only option to choose from all the corrective patterns according to the Elliot Wave Principle, is flat.

Regarding the weekly trading chart (log scale), we can observe closer the 3s that the sub-waves of the (a) and (b) Super Cycle waves have made. We see thoroughly the triangles that have been formed within the a and b Cycle wave, and also the 3-wave count for the (b) Super Cycle wave.

As we suggested above, we are expecting a retracement for the completion of the (c) Super Cycle wave, which will be a motive wave, impulse, or a diagonal, and it will be exceeded the end of the (a) Super Cycle wave. Therefore, it is expected a 5-wave sequence with or without overlapping between its fourth and first upcoming Cycle degree waves.

Diving more deeply into the daily trading chart (log scale), we assess that maybe the rally of the (b) Super Cycle hasn’t finished yet. Having seemed the shape of a rising zig-zag – 5-3-5 pattern – we conclude that the c Cycle wave which has to be subdivided into a 5-wave count, hasn’t been completed, and it is remaining the final ((5)) Primary wave to be ended. The ((3)) Primary was an extension of an impulse of (1) – (5) Intermediate degree waves.

Hence, with a pattern of 3-3 so far for the first two legs, maybe a flat is on the run to the completion of the b Cycle wave – 3-3-5 flat pattern -, and after that, it will finish the last c Cycle wave, without ruining the basic scenario which is the ending of the (b) Super Cycle of the ((IV)) Grand Super Cycle wave. 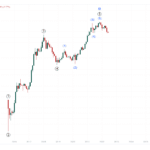 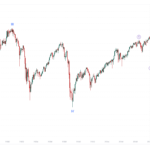