Invesco is an investment management company that acquired the Power Shares Capital Management firm in 2004 so that to get access to the exchange-traded fund business (ETFs). It manages over 120 ETFs, and one of them is the PowerShare Commodity Index Tracking Fund or DBC. Just to say that ETFs are products referring to stocks, bonds, futures, commodities, or indices that replicate a specific market. One example is the S&P 500 ETF which consists of all its companies with the same weight as the real index.

On the monthly trading chart (log scale) against $10,41 in March 2020, Invesco Commodity Index Fund started a sharp rally reaching the levels of the previous ((B)) Primary of the IV Cycle wave where the peak, as a decline of an ((A)) – ((B)) – ((C)) Primary waves that constructed a zig-zag, was at $32.  The end of the III Cycle wave was at the all-time high that previously was said.

The current upward movement seems like a 5-wave sequence, but we are not sure. Only one thing is for sure. That rising, ruined the downtrend since it broke the last Intermediate wave of the ((C)) Primary.

Hence, we expect to see a corrective mood with a 3-wave count mode, in the support levels of the last triangle as of a fourth Intermediate wave of the ((C)) Primary wave, and after that is alright to take the trade with almost a risk/reward ratio of 1:2.

Weekly Range: Completing wave ((5)) of I

Going down respecting the weekly trading timeframe (log scale), at the end of the IV Cycle wave, an impulse has unfolded as of a (1) – (5) Intermediate waves subdivision.

Besides, it’s preferable to see the first two legs of an unfinished impulse rather than to trade against the main trend.

Daily Range: Searching for evidence that the top is placed 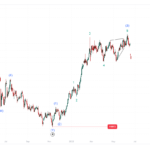 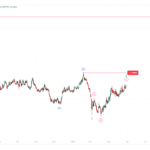