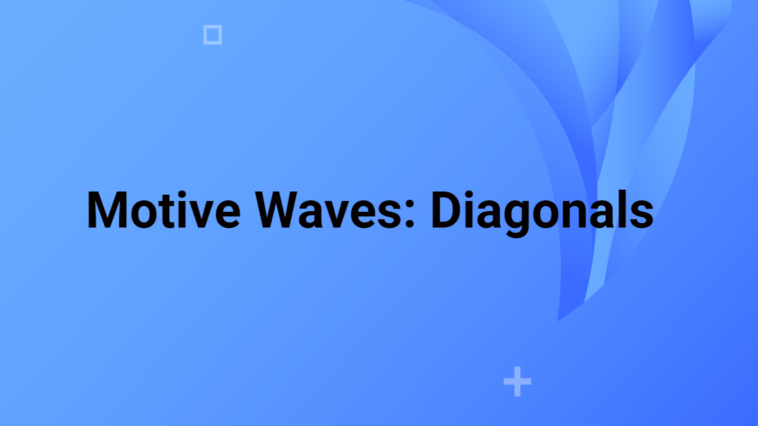 A diagonal wave is also a motive wave-like impulse. It consists of a 5-wave sequence structure, and moves any market to the main trend, but is not an impulse wave. The only difference between them is that diagonals have the shape of a wedge, expanding or contracting. Diagonals can be divided into 2 main categories. Leading and Ending Diagonals. Thus, the 4 combined categories of observing a diagonal – wedge shape – in any chart are, Leading contracting Diagonal, Leading expanding Diagonal, Ending contracting Diagonal, and Ending expanding Diagonal. We know that to find the main trend of an asset, we have to observe the pattern of higher high, higher low (uptrend), or lower high, lower low (downtrend). When we achieved that, and we are positively sure about the main trend, then concerning the Elliot Wave Principle about the Diagonals, we have to seek one of the figures below.

The 4 types of Diagonals

What does it mean though the words Leading and Ending? Elliot, after his experience with the markets for writing the rules of his Theory, observed that wedges are formed only as first and/or fifth wave in any motive wave, or as A and/or C wave in any corrective wave. This limitation for diagonals led him to the fact that, in motive waves, the first diagonal wave is called Leading, whereas the fifth diagonal wave is called Ending.

The distinction between contracting and expanding diagonals is in a way the same as in triangles, meaning that the upper and bottom trendlines are converging or diverging respectively.  See the figure above.

Generally, it’s relatively easy to identify diagonal shapes, and Elliot made the rules that accompanied them. The rules are:

We want to remind you that the 3, 4, and the 5 rules, in essence, are one rule split into 3 rules. Also, there are some guidelines that unlike rules can be broken. Such guidelines are:

In conclusion, the structure of diagonals is 5-3-5-3-5 for leading ones, and 3-3-3-3-3 for ending ones. This is not a rule though, because there are many examples in real life, where a leading diagonal had unfolded as a 3-3-3-3-3 formation.

In the next session, we will explain the structure of corrective waves.