Ethereum is like Bitcoin, a decentralized computing platform that can run any application or service, from games to finance. It’s the 2nd biggest cryptocurrency after Bitcoin, based on market capitalization.

The Ether is traded at $1799, with its all-time high at $4864,13, and researchers from all over the world say that in 2030 could reach $47.000. On the other hand, some others say that all the cryptocurrencies are a ‘’fake’’ fairytale that will end ignominiously.

Having fewer years in markets than Bitcoin, the monthly trading chart for ETH reveals to us an uptrend without any huge correction till now that unfolds into Cycle waves.  More specifically, due to its higher highs and higher lows, we estimate this impulse as a III Cycle wave that has been completed or is about to end.  Almost always, according to the Elliot Wave Theory, the corrective waves are in alternation with each other, meaning that when the second wave of an impulse is a sideways pattern then the fourth wave has to be sharp. So, this is the reason behind our logic of being to the scenario of completion of the III Cycle wave.

The sub-waves of the III Cycle wave are the ((1)) – ((5)) Primary waves, with the last one to be subdivided into a 5-wave sequence also. We can see the difference between the (2) and the (4) Intermediate waves of the ((5)) Primary wave, as we mentioned previously, because of an alternation.

Looking at the weekly trading chart (log scale), we realize the time and the price differentiation between the (2) and (4) Intermediate waves. The first was an expanded flat and the second made a sharp zig-zag. From the peak of the III Cycle wave has started a fall, which is already counted as a 3-wave mode having dropped to the level of the (4) Intermediate wave at $1702.

This is the first reliable support, but we are not sure if the market is going to stand there, because the ((4)) Primary wave took more time and went more down than the hypothetical correction of the greater degree IV Cycle wave. Thus, we suggest that the market will go further down, to find a better support level. Maybe the peak of the ((3)) Primary at $1463,72 would be ideal for its next support. Regarding our counting scenario, the length of the upcoming IV Cycle wave dropped to the 61,8% Fibonacci retracement level of the whole III Cycle wave, at $1857, and the next highly important retracement level is the 78,6% at $1040.

Another tool for evaluating a decline is the Fibonacci extension, which is based on the guideline of the Elliot Wave Principle, that a 3-wave count, like a zig-zag, has almost equaled the 2 legs of the same trend. As the daily trading chart (log scale) tells us, the zig-zag that the IV Cycle tries to form has already done its (A) and (B) Intermediate waves, waiting for the final (C) of the same degree to be completed.

With so many support levels that were discussed, we are keeping our bearish feeling, for now, waiting to finish and trade more safety for the final V Cycle wave. 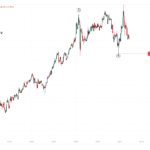