According to the Bank of International Settlements, EURGBP pair has the second and the fourth place of the traded currencies concerning the foreign exchange turnover, with 32,3% and 12,8% respectively. 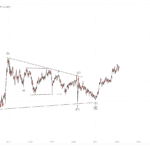