EURUSD belongs to the Majors pairs because it has the first place of the most traded currency pairs globally since both of them have above 120% out of 200% – USD has the 88,3% and EUR has the 32,3% – of the global foreign exchange market turnover, according to the Bank of International Settlements, which means that the pair has a 60% of the total turnover.

With too many fluctuations, but a clear uptrend though, we cannot figure out which is the wave degree made its top, but the downtrend from its top can be explained, as shown in the monthly trading chart (log scale). So, the pair tells us that the decline from 2008 is a double correction of a ((W)) – ((X)) – ((Y)) zig-zag shape of Primary degree waves.  A double corrective pattern has the structure of 3-3-3 in its subdivision, and that’s why we see an (A) – (B) – (C) formation of Intermediate waves for ((W)) and for ((X)) Primary waves.

More specific within the ((W)), its (B) Intermediate wave was a running triangle, after the sharp (A) and (C) same-degree waves. The 5 sub-waves of the next rising ((X)) Primary wave, formed a contracting triangle which has been completed at 1,22664 points.

Eventually, looking at the weekly trading chart (log scale), we see how the market was making the ((X)) Primary wave. Because the market after the 1,22664 points made a lower low, breaking first the bottom trendline of the triangle and exceeding the end of the (C) Intermediate of the ((W)) Primary wave, we conclude that this is a part of the construction of the final ((Y)) Primary wave, which is expected as of an (A) – (B) – (C) formation of Intermediate waves.

Daily Range: Higher in wave (B)

We are expecting a bear market rally as the second leg of ((Y)) Primary wave – (B) Intermediate wave –  till the acceptable Fibonacci retracement levels which are the 38,2%, 50%, and 61,8% levels, at 1,10435, 1,12672, and 1,14954 points respectively. Usually, according to the guidelines of the Elliot Wave Theory, the second waves of a zig-zag, have a sharp shape at 38,2% level, but the rules don’t cancel the idea of making the second leg of a zig-zag, as of any corrective pattern, excluding only the double and triple combinations, and simultaneously go further to the next retracement Fibonacci levels of 50% or even the 61,8%.

Hence, when we can count the expected (B) right, the final wave will be the downward (C) Intermediate of the ((Y)) Primary wave, which is expected to make a lower low than the end of the ((W)) Primary wave made at 1,03403 points in January 2017. 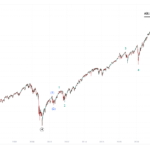