GBPUSD is one of the Majors pairs since the USD has the 88,3% of 200% of global foreign exchange turnover and GBP has the 12,8% out of the total 200% of all traded pairs worldwide, according to the Bank of International Settlements. This means that half of the global trades belong to that pair. The reason behind the 200% turnover comes from ‘’buy and sell’’ transactions that are counted twice.

The overall picture – a 3-monthly trading chart – is held at least 2 centuries ago, when the pound was very strong against the American dollar because it was the British empire that had sent many immigrants to ‘’construct’’ the new American nation. However, since then, the dollar was gaining ground cause of the larger territory and the 329 million people, which made the United States a powerful trader in all goods globally.

From the trading chart, we shall keep the completion of the (iii) wave, and the completion of (iv) as a w-x-y flat correction. We are sure that (iv) has been finished because the price after that, went lower than the x wave. So, the decline from the end of the y wave will give us the final (v) wave which will be formed by 5-wave mode sub-waves. The pattern so far looks like an ending diagonal, due to the overlapping of unlabeled iv into the I wave of the same degree, according to the upper and bottom trendlines in the chart.

The weekly trading chart shows the 5-wave sequence for the ending diagonal of the (v) wave. However, the 5 sub-waves, i-v that were unfolded, have a 3-3-3-3-3 wave structure and are justified by the structure of the ending diagonal. Into the v wave now, this unfinished [W] is a zig-zag made by an (A)-(B)-(C) pattern. More specifically the (B) wave of the [W] was a running triangle and the unfinished (C) of the [W] wave will be subdivided into 5 lesser degree waves, labeled as 1-2-3-4-5. Till now, the 1, 2, 3, and 4 waves have been completed and the last 5 is remaining to be ended.

Having referred to the [W] of the v of the (v) wave structure, diving deeper into the daily trading chart, we see better the sharp (A) of the [W], the triangle for the (B) of the [W] wave, and the final (C) of the [W] which is unfolded an impulse wave. Again, using the parallel trendline for impulses this time – joining the 2 and 4 with the 1 and 3 –justifies our market forecast for the upcoming 5 of the (C) of [W] approaching the 1,2000 points level.

Therefore, if our wave count is right, we suggest first seeing where the 5 of (C) of the [W] and the [X] could end, to trade more safely for the last [Y] of the v of the (v) wave. 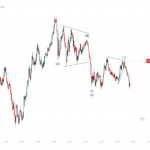 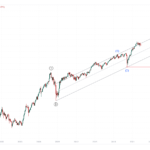