Nasdaq Composite Index is the third stock market index of the United States consisting of the 100 largest listed non-financial companies on the Nasdaq Stock Exchange, based on their weighted market capitalization. It was introduced in 1971 with a base of 100 points.

The categories of the industries contained within the index are more in the Information Technology sector and Shipping.

Being within the III Cycle wave which has unfolded as of a ((1)) – ((5)) Primary waves, as the monthly trading chart (log scale) shows, we assume 2 scenarios for this uptrend. In the first scenario, the III Cycle has been completed, so it is expected to move lower – as it does indeed – to construct the IV Cycle wave in a 3-wave sequence.

On the other hand, in the second scenario, the only thing that it changes is that the III Cycle is the V Cycle wave. Thus, again the market has to decline, with the difference that the end of it will be an unlabeled (I) Super Cycle wave, and the decline will be the (II) Super Cycle wave.

Again, the alternative idea is if the III Cycle is the V Cycle, then the retracement will be more serious than we thought because it will form the (II) Super Cycle wave. It’s obvious that depending on the degree of any wave, the multiple is going to be bigger. Thus, the retracement of the III Cycle wave is different in price and duration from the retracement of the (I) Super Cycle wave. Moreover, the corrections between the second and fourth waves, even if the degree is the same, have lots of differences in price and duration, according to the Elliot Wave Principle. 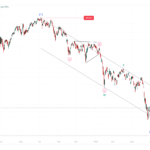