Natural Gas is a fossil fuel that is primarily used for the manufacture of plastics, secondly for heating and electricity generation, and lastly as a fuel for vehicles. Due to the new assignment from all Governments on the planet, of controlling the climate change, the turn of having the less footprint of carbon dioxide, makes the natural gas an important contributor to the so-called Green Energy, since its burning produces greenhouse gases.

After a huge correction, in time and price simultaneously (2006 – 2020), the natural gas started an upward move, which is what we are going to interpret now, with the help of Elliot’s wave theory.

At a first look at the monthly trading chart (log scale), after forming the top ($15,78) and the bottom ($1,44) of the (III) and the (IV) Super Cycle waves respectively, the market rallied and till now has broken the end of X Cycle wave. This decline was a double correction, as the W-X-Y pattern, where the W Cycle wave was a zig-zag itself, the X Cycle wave was an expanded flat gaining almost the 50% of W, and the final Y Cycle wave another zig-zag, building a double three. Our market forecast says that we are in the I Cycle of the (V) Super Cycle wave, so we are expecting the completion, to find support lower, through the next II of (V).

Additionally, concerning the wave count, this I of (V) wave has constructed a sharp 5-wave sequence. Thus, we believe that is an impulse, and has already finished or is about to finish soon. 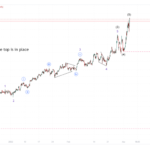 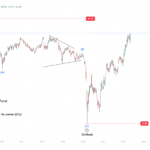