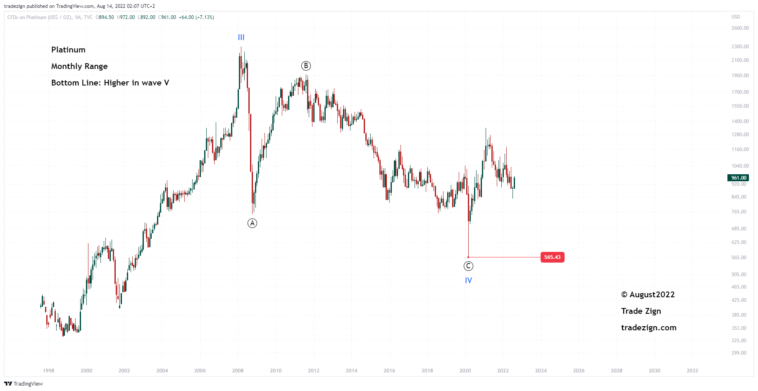 Platinum is a noble metal with resistance to high temperature, as well as corrosion. The pre-Colombian civilization has found in the sands of several rivers and was creating artifacts.

During the ‘’Lehman Brothers’’ crisis in 2008, as the monthly trading chart (log scale) shows, Platinum reached its all-time high price while constructing the III Cycle wave. Thereinafter, the next corrective wave as of the IV Cycle wave has unfolded an ((A)) – ((B)) – ((C)) zig-zag pattern of Primary degree waves. The ((A)) was a very sharp decline, the ((B)) was a nice bear market rally as a zig-zag, and the ((C)) was an impulse as of an unlabeled (1) – (5) Intermediate waves with the (3) Intermediate to be extended too in an unlabeled impulse of 1-5 Minor degree waves. Look how the last (5) was so sharply.

Against $565,43 started a rally that broke the previous (4) Intermediate of the ((C)) Primary of the IV Cycle wave. So, seeing a rally and a correction after that, we conclude that the metal is at the beginning of its first and second leg as ((1)) and ((2)) Primary of the V Cycle wave respectively.

And what do we look at in the weekly trading chart (log scale)? The same pattern as it is discussed previously. The corrective ((2)) Primary of the V Cycle wave, for the moment, seems that is unfolded in 3s making lower lows in its first leg. Thus, only a double correction is possible, according to the Elliot Wave Theory rules. The subdivision took place as a (W) – (X) – (Y) Intermediate waves, with the (W) forming a zig-zag, the (X) constructing an expanded flat, and the final unfinished (Y) being a zig-zag again. The alternative solution of course for an (A) – (B) – (C) of Intermediate waves in a zig-zag cannot be canceled out, but we prefer the first option.

Having added, for a better view, a parallel channel on the daily trading chart (log scale), we will see where the metal will be going. So far, within the hypothetical (Y) Intermediate wave, it is expected to break the $911,50 and continue further the corrective mood. The bottom trendline of the channel intersects the 61,8% Fibonacci retracement level which is a potential case to end there. It is not uncommon though to get under the bottom trendline as the fifth waves of an impulse do. And we mean that the last (Y) Intermediate wave, will be a 3-wave mode constructing an A-B-C of Minor sub-waves, and the C will unfold a ((i)) – ((v)) of Minute degree waves. 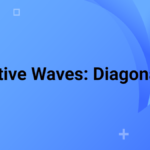