Silver, as a pure metal, was at the ancient times, one of the seven precious metals. Its purity, in essence, is combined with the gold and the other metals, as their alloy. It is found in the use of coins and many jewelries, in filtering the water, in solar panels, in specialized mirrors, in confectionery, as well as in medical instruments, like bandages and catheters. Silver (SI=F), as a derivative of its price in the financial world, is traded through the COMEX (CME Group), where was making its highest price at $49.52 on April 2011.

At a first sight, on the monthly chart (log scale), we see the peak in 2011 at $49.52, labeled as a Grand Super Cycle III. After that, a sideways correction took place, while till now, the market can’t be able to exceed the all-time highest high. So, counting the waves, after the (III) wave, we end up positioning this next (IV), in the category of contracting triangles. Also, just to mention, that the first wave of this decline, (a) unlabeled, was made an acceptable decline, concerning the measurement for fourth waves, which touched the 50% Fibonacci retracement level, at $3.46, and it never got into the territory of (I). The bottom formatted trendline shows that after this first decline, the market has made higher lows and lower highs, something that justifies our belief of a contracting triangle, for the whole (IV).

On the same monthly zoomed chart, we can see the ups and downs within this triangle. First of all, the corrective waves are making 3s, which is a really good sign. So, for now, having made the (a), the (b), and the (c) of (IV), we are expecting to be completed its (d) wave. Since we already know that is going to make a 3-wave sequence, we have finished the upwards a, and we are about to complete the b of this (d).  This complex b of (d), is unfolded as a double correction in a formation of (W) – (X) – (Y). Thus, we have 2 reasonable tools to use, in order to predict the end of this b. On the chart, we see that the Fibonacci retracement levels and the Fibonacci extension levels are in line with each other. We mean that the 50% – 61,8% retracement level prices of the whole a (black dashed lines), are almost equal to the extension level prices of (W) (red numbers), so that it will be formed the (Y) of b. These prices are in the zone of the $6.682 – $9.019 level.

The weekly chart above (log scale), shows us better the labeling of the whole triangle, which will be finished with the (e), as we know from the rules of the EWT, that all the triangles construct.  Having made the (W) with the market traded beyond the end of it now, silver is expected to end up at this zone, that we were talking about previously. Looking at the left side of the chart, we see the support levels that were within the (c).

In a closer look, on the daily chart (log scale), we can observe the complex ((X)), where its duration was held from September 2020 to March 2022. Its bottom was at $21.433. This ((X)), is also a triangle, which is an acceptable pattern for such a double correction. Having broken the bottom trendline of the internal triangle of the ((X)) wave, the market went sharply down, as the ((W)) did, and moreover, having made, on 12 May of 2022 a close of $20.662, we are absolutely sure, that this second indication of the broken supports, will constitute the deeper continuation of the correction, till the end of ((Y)) of b of (d). 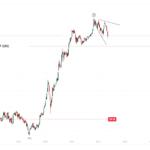 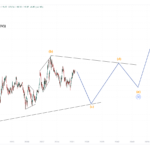