USDJPY pushed higher in a three-waves in wave (B) which ended at 118.77 as soon as wave (A) ended. From the top of wave (B), USDJPY declined in three waves for wave W of (C) that ended at 104.71, then remained sideway and completed a triangle wave X that ended at 112.50. From wave X high, USDJPY declined in a three-waves and completed wave Y of (C), From the low of wave (C), “USDJPY” moved higher in three waves and completed wave (D) at 111.70. From the high of wave (D), “USDJPY” declined for the last side of the triangle wave (E) that took the form of a complex correction.

Following the completion of wave ((B)) in the form of a triangle, we anticipate a strong move higher to complete wave ((C)) near the 125-126 level.

The push higher than wave (B) will give us evidence that the bottom is in place and wave (C) is in its early stages. 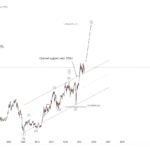 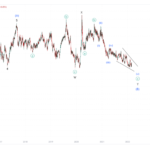