USDJPY is a Major currency pair, and according to the Bank of International Settlements, both the U.S dollar and the Japanese Yen are holding 105,1% out of 200% of global foreign exchange market turnover. The 200% total turnover stands for the buy and sell-side at the same time.

Weekly Range: Searching for evidence that wave c of (Y) of [B] 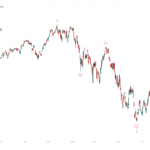