A Standard & Poor’s Depositary Receipt, or SPDR, is a type of exchange-traded fund, that began trading on the American Stock Exchange (AMEX) in 1993, when State Street Global Advisors’ investment management group, first issued shares of the SPDR 500 Trust (SPY). Consisting of the top energy sector companies, like Chevron, Exxon Mobil, ConocoPhillips, and many more, is a real trading asset with stability and low volatility.

Looking at the monthly trading chart (log scale), we could observe the retracement from the top of labeled ((3)) Primary, at $101,52 to the bottom, at $22,88, which was meaningful support,

as it touched support price levels of a decline within the ((3)) Primary. We count this retracement as a ((4)) Primary wave,

because the last wave of ((3)), was an ending expanding diagonal, 1<3<5< and 2<4 also overlapping of 4th wave into the price territory of wave 1, as its fifth Intermediate degree wave, and we are sure that after an ending diagonal, the market gives a correction near its beginning and beyond it.

Thus, maybe the (3) Intermediate of ((5)) Primary wave has been completed or is about to finish. So, for the continuation scenario, the next Fibonacci extension level is 261,8%, which is represented by the $109.58.

On the other hand, someone would also say, that this is not a ((3)) and ((4)) Primary waves, but ((1)) and ((2)), we would say for him that we putted the ((3)) and ((4)) waves relative to the crude oil wave count. Nevertheless, our market forecast would remain the same as now. Be careful of a retracement, but have in mind the main uptrend. 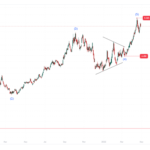 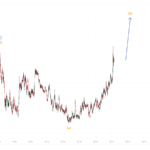